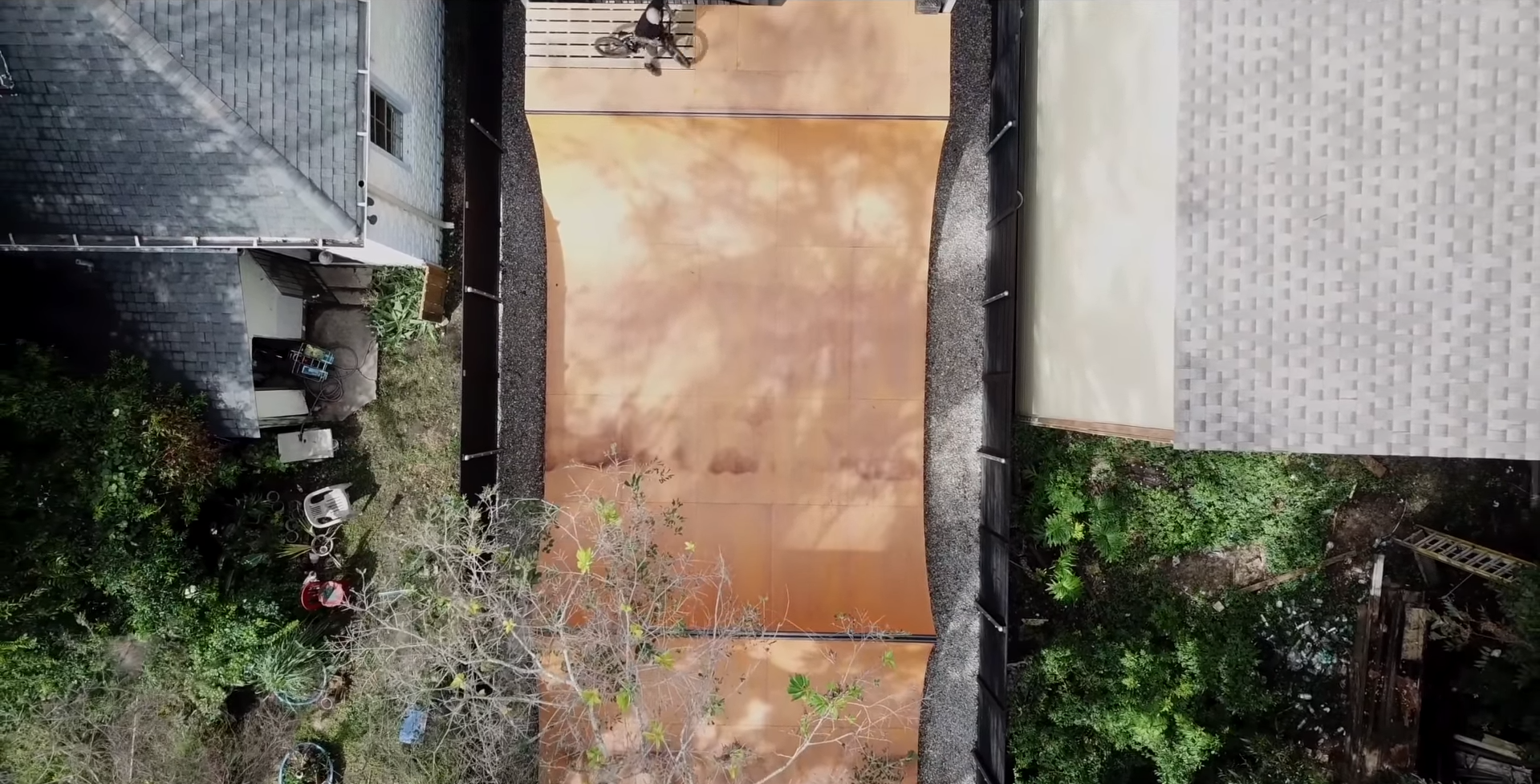 When you finally make your childhood dreams come true!

“I was just so kind of dead set on it for so many years, and was finally able to open enough credit card accounts to make it a reality.”

Ooti Billeaud finally got to accomplish what most of us have only dreamt about having since we were young, and even now still – a backyard BMX/Skate set-up!

Throughout all of his years of living with his parents and renting other properties, his parents nor landlords were even remotely interested in his BMX pursuit. When he finally got the land to turn his dreams to reality, he decided that he wanted to build the ramp first, but as always, there were some setbacks and problems that needed tackling before.

While having gained some experience in construction and building from his teenage years to his early twenties, Ooti felt that he could face the burden of being the contractor and designer for his personal build, but was he ready for all the details and incidents that are involved with building a home?

In this short video documentary about tiny living and following dreams, Kirsten Dirksen tours Ooti’s finished Shotgun Duplex project to see what he has set out to do since day one. You will be impressed by a lot of things, his commitment to the project, the design, placement, and overall style of the house, how it all fits together and what makes this house so special to Ooti. The place looks quite small but comfortable and cozy at the same time, and I certainly wouldn’t have many problems living there myself!

Travelling or visiting near Bywater in New Orleans? You can even rent the downstairs apartment from him on Air BnB here: https://www.airbnb.co.uk/rooms/23908670

“I do like riding bikes everyday, it is a lifestyle, I feel like a 40 year old surfer that wakes up and goes to surf before work everyday or something like that. I’m a big proponent of lifestyle design, I absolutely believe in creating the life you wish rather than just being passive about what your life is. I designed the house to fit the way I live. I was motivated to build this house just because my whole life I’ve wanted a ramp and everywhere I’ve lived I’ve just never been able to build one, either at my parents house or anywhere I was renting in my twenties.”

“I rode my first legitimate backyard ramp when i was probably 11, 12 or 13 maybe. It kind of kept me motivated all these years just to make this reality, I knew it was important to me and it was such a huge, stressful undertaking but I knew the reward of having this in my backyard – especially in New Orleans where there are not a lot of ramps. There’s not really any big ramps in Louisiana at all anymore to my knowledge and this is actually probably the biggest ramp in the state.”

“It took us 11 days to build, everyday from start to finish. I had Ryan Corrigan – who’s a professional ramp builder for the X Games – come out and just lead the build and then me and my friends made it happen. But it was just always about just having something fun to ride, something that would last long-term, that was built well, and that’s what I’ve wanted for as long as I’ve wanted to build a ramp.”

“To have that space, for not just me, but for people I’m close to and ride BMX bikes with, I just wanted to provide that space. I was just so kind of dead-set on it for so many years and I was finally able to open enough credit card accounts to make it a reality.”

“I wanted to build a ramp before I built a house, but the city let me know that if I didn’t build a house first they would take my property back, minus 25% that I paid for it, so the house came first.”

“I just built the house to where I had as much backyard space as possible, to build the biggest ramp possible. Ordered a ramp with a side of house.”

“I felt a connection in the city at this point because I’ve been in this area for so long. There’s just something about New Orleans… People always say it’s the most unique city in the country. I remember living a few hours away from here during Hurricane Katrina, people weren’t sure if the city was gonna cope after, and I wanted to be a part of rebuilding the city. I chose Bywater just because the land right next to Mississippi is high-ground for New Orleans. The most sought-after neighborhoods along the river can be more expensive, but even still it is still pretty affordable to live, especially if you find a place that hasn’t been freshly renovated and don’t mind putting in a little work yourself on it.”

“I think that Shotgun homes are fascinating, just the history behind them and how much longevity they have had, especially in New Orleans. There are more Shotgun houses here than anywhere else in the country, and they are built from barge-wood (Barge board) that was floated down the Mississippi River. The barge was all this old-growth wood from up North that was dismantled and used to build a lot of these Shotgun houses. That’s why a lot of these old-growth houses are still standing today and people renovate them, you cant buy wood like that any more.”

“This house was really just to look like a Shotgun because I’m on the historic district in Bywater and they wanted it to look like the 3 Shotguns next to my house – which it does, but really it’s just 2 tiny apartments stacked on top of each other.”

“It’s a Duplex, I live upstairs, and I rent out the downstairs to help out with the bills. I never would have been able to purchase in this neighborhood if i hadn’t built something. I couldn’t really afford that many places, or anywhere that was high ground. I feel like the one constant thing it has had is change and I wanted to be a part of it you know, making it my own, re-building the city.”

“I was naive in going to build a house even with all the experience I had. It took me 5 and a half years from purchasing the property and doing it from start to finish. It took me 2 years just to get a set of plans and even they had mistakes. Also the mechanical things that I had to figure out… – it just felt like that it was all just research and detail oriented tasks.”

“I got the design from basically looking at commercially available, residential designs online because I’m not trained as an architect at all, I’d never even taken any architectural or design classes in college, but I basically looked at the designs and how things worked and I came up with my own tailored design.”

“From the beginning I wanted it to be a Duplex because I knew I would need the help in paying for it after it had been completed, and I designed it in a way to where if I ever wanted to live in a house so that it was just a single family 2 story house then I could – I wouldn’t have to knock down any walls or doors, but otherwise it’s a perfectly legal, functional Duplex.”

“I wanted the rooms to be modular. Basically every house I’ve lived in since I moved out of my parents house hasn’t had a closet, so I wanted modular racks and I designed the house without any closets. It’s motivation to keep less stuff.”

“It’s my first house that I’ve ever bought and I want it to be at least some-what financially self sustaining. There’s 5/8 sheet-rocks separating the apartments, I have a metal heavy-duty fire door that locks from my side separating them as well so it works out. Like I said, It’s just back to modularity as to layout of the space, and just the functionality of the entire Duplex.”

“One of my goals I had in building the house was to make everything long-lasting. Everything from the doors – I used heavier duty doors, stronger handles – and things like the beds are all pine downstairs. For the counter-tops I used concrete, I used real wood cabinets, I wanted everything to be as long-lasting as possible.”

“I didn’t want to use cheap things that I would eventually have to throw away and replace often. The floors, I used Stranded (woven) Bamboo floors which are just as hard as Hard-wood floors but they cost less and are water-resistant, which is good if you have an 80 lb dog drooling all over your floor after runs.”

“Since both spaces are so small I wanted everything to feel as bright and open as possible, especially since I work full time at home. I need my space to be keeping me awake and keeping me energized. All the walls are white, the floors are light-coloured, there are lots of windows everywhere.”

“It makes the space feel bigger, it makes me feel energized in waking up, it’s almost like a peaceful loudness if that makes sense. Both the apartments were designed small, one because I’m a fan of tiny living, but also just because I wanted to have as much backyard space as possible. It was always about the ramp, it takes up the entire yard.”

“Having a backyard ramp has really been a goal for the majority of my life. I was able to get it done and it feels good to do that. I don’t know if I would have done it if I knew what was going to be involved, maybe it was better that I was naive. I basically have a gym in my back yard.”

“Being able to ride everyday and just maintain that lifestyle, that keeps me mentally sound, keeps my physically healthy but it also keeps my brain right in just having that outlet. Not to say what I’m doing is all that special or anything, but at least trying and putting in the effort to craft your life and live the way that makes you happy, that makes you feel the most fulfilled, and for me that’s creating things in general, positive things – things that I feel are at the very least good for the BMX and Skate communities, if not just for the overall community.”

“I’ve got a lot of positive feedback from my neighbours about the house and even the ramp as well too, which feels good, especially with the ramp aspect. It feels surreal to actually be in it at this point. It’s crazy to work on the same project for 5 and a half years and to actually be able to pull it off – something that you’ve never done before. It feels good to be in this space, and you can’t really complain if you’re the one who designed every detail about it, inside and out.”

“It’s not for everyone, it’s a headache. I have more grey hairs from this project than I can count, but I’m absolutely a believer in trying to create the life that you want to live.”